I learned about the benefits of butyrate while completing my major research project for my Master of Science degree, which I completed in March of 2020. My research was focused on exploring the link between the gut microbiota and weight, and whether manipulation of the gut microbiota could promote weight loss.

The primary takeaway from my research was that gut health, meaning an abundant and diverse gut microbiome, was associated with improved weight management. The easiest way to achieve gut health is to eat a high fiber diet containing plenty of different plant foods. The reason being that fiber, particularly prebiotic fiber, feeds our gut microbes and the fermentation process produces short chain fatty acids that are associated with beneficial health outcomes. In short, it is actually the short chain fatty acids that provide many of the benefits that we associate with gut health. There are three main short chain fatty acids: butyrate, propionate and acetate. The benefits of butyrate are particularly well established.

Benefits of butyrate include reducing inflammation and risk of certain chronic diseases (including obesity, heart disease and type 2 diabetes), supporting digestion, and having a role in immunity and metabolism.

The MetS microbiome study (1) was recently released and discussed the beneficial role of SCFAs. The study investigated whether the gut microbiome plays a role in the development and progression of metabolic syndrome. Metabolic syndrome (MetS) is a disorder diagnosed by the presence of several factors that significantly increase the risk of cardiovascular disease, including insulin resistance, increased blood pressure, abdominal obesity and altered glucose and lipid metabolism.

The results of the study were fascinating. The authors found that the gut microbiome of MetS patients had significantly lower gut microbiome diversity. Certain bacteria species were negatively correlated with waist circumference, meaning that low quantities of some bacteria were associated with abdominal obesity. The microbiome changes in MetS patients contribute to inflammation and MetS diseases by inhibiting the production of SCFAs, which we know are associated with health benefits including reducing inflammation. Overall, the study indicated the potential ability of a healthy gut microbiota as a therapeutic tool to combat metabolic syndrome.

One of the primary benefits of butyrate is that butyrate actually fuels your gut cells, since it is the main energy source for colonocytes, the cells that make up your gut lining. Most cells in our body use glucose (sugar) for fuel, but the colonocytes use butyrate as their main energy source. This relationship is beneficial, as butyrate fuels colonocytes and in return these cells help to provide an oxygen-free environment for beneficial gut microbes to thrive.

Additionally, higher butyrate levels have been shown to increase levels of glutathione, an antioxidant that neutralizes free radicals in the gut.

A low level of tightly controlled inflammation is maintained in the gut lining. However, negative lifestyle factors can description this tight control and increase inflammation, which can lead to oxidative damage over a prolonged period. The anti-inflammatory effect of butyrate reduces oxidative stress and controls the damage caused by free radicals.

Short chain fatty acids may be beneficial in the management of some digestive disorders, such as irritable bowel syndrome (IBS) and inflammatory bowel disease (IBD). Butyrate, in particular, has anti-inflammatory effects in the gut.

Butyrate may have a role in the management of leaky gut disorder due to its role in gut permeability.

The gut lining is an intestinal barrier. It selectively allows things like vitamins and minerals to leave the gut, enter the bloodstream, and travel to where they’re needed. It also stops toxins, pathogens, and food compounds from entering the bloodstream and making you ill.

This process is called intestinal permeability. When the barrier is healthy, junctions (small holes in the gut lining) relax, allowing water and nutrients to pass through. A ‘leaky gut’ refers to a gut lining that is too permeable (junctions become too loose) and allows harmful bacteria and other substances to enter the bloodstream.

Butyrate produced by your gut microbes as a result of fermentation of dietary fiber provides the fuel needed by the cells (colonocytes) in your gut lining to maintain tightly regulated permeability and integrity of the intestinal mucosa (gut lining). This preserves the integrity of your gut lining and prevents ‘leaky gut’.

Both Crohn’s and Ulcerative Colitis (UC) are associated with a reduction in a particular type of bacteria called Faecalibacterium prausnitzii, which may suggest a protective role of the bacteria in IBD. The reason being is thought to be that it is a main producer of butyrate, which is known to support digestive help and combat inflammation.

One of the other benefits of butyrate is that it enhances the secretion of several gut hormones, including glucagon-like peptide-1 (GLP-1) and peptide YY (PYY). GLP-1 increases insulin production and reduces glucagon production in the pancreas. PYY increases the uptake of glucose in both your muscles and fatty tissue. Increased production of short-chain fatty acids, (including butyrate) in the colon, increases the release of these gut hormones, indicating potential benefits for managing blood sugar levels and preventing weight gain.

SCFAs have a role in energy metabolism.  As mentioned above, SCFAs are the primary end products of carbohydrate fermentation by gut bacteria. Approximately 10-20% of ingested dietary carbohydrates are resistant to digestion by the small intestine and are fermented by gut bacteria in the colon, resulting in the production of SCFAs. SCFAs impact gut motility and transit time, as well as affecting insulin sensitivity and energy expenditure. SCFAs provide fuel for gut bacteria and supply approximately 10% of daily energy requirement in humans. By-products from the fermentation process may have anti-obesity metabolic effects such as reducing appetite and increasing satiety, modulating bile acid metabolism and increasing energy expenditure.

Specifically, the SCFA butyrate has a role in energy metabolism, suppression of inflammatory immune responses and improved insulin secretion. SCFAs have been linked to the glucose and lipid metabolism, immune homeostasis, gut permeability and the secretion of gut hormones. SCFAs function to regulate host energy intake, energy expenditure and energy storage (2).

By-products from the fermentation process of dietary fibers resulting in the production of SCFAs may have anti-obesity effects such as reducing appetite and increasing satiety, modulating bile acid metabolism and increasing energy expenditure. Intake of non-digestible carbohydrates have also been associated with increases in the gut peptide hormones glucagon-like peptide (GLP)-1 and peptide (P)YY which are known to reduce appetite and therefore food intake. Increases in GLP-1 and PYY occur in conjunction with decreased secretion of ghrelin, another gut peptide hormone, which is known as the “hunger hormone” and increases food intake (3).

Additionally, SCFAs may have a role in appetite, as they can be detected by free fatty acid receptor 2 (FFAR2) and receptor 3 (FFAR3) which regulate hormones involved in appetite control. Overall, evidence demonstrates that SCFAs have a role in reducing appetite and altering energy metabolism which can contribute to maintaining a healthy weight (3).

How to Boost Butyrate Production?

Now that we have established all of the health benefits of butyrate, you may be wondering how to increase your production of butyrate. As discussed above, SCFAs (including butyrate) are produced by the fermentation of non-digestible carbohydrates (fiber) in the colon. Ultimately, a high fiber diet is the way to support butyrate production. Particularly certain types of dietary fiber which are known to be prebiotic (food for our healthy gut bacteria). Examples of these foods include barley, oats, bran, berries, apples, garlic, onions and asparagus.

Should I Take a Butyrate Supplement?

With all the clear benefits of butyrate, it’s clear it’s something we want more of!

As I highlighted above, the best way to increase the production of butyrate is to consume a high fiber diet rich in a diverse variety of plant foods. Particularly foods with prebiotic fiber will support the production of SCFAs including butyrate. However, I recognize that fiber intake is less-than-ideal for most people, and this can become particularly challenging for those with digestive conditions such as IBS and IBD who may not tolerate large volumes of fiber. Since butyrate supports digestive health and has anti-inflammatory benefits, it’s particularly impactful for those with IBS and IBD.

Therefore, there may be a role for butyrate supplementation. Studies have shown promising results in the improvement of intestinal permeability and inflammation associated with IBD with parenteral (intravenous) butyrate infusions. Since we rely on oral supplements rather than intravenous outside of hospital environments, this can present a challenge. A challenge with oral supplementation of butyrate is that it can be absorbed in the stomach, meaning that it won’t reach the large intestine to fuel its cells (those colonocytes we discussed above!) and provide the desired benefits.

However, a new method of oral butyrate supplementation in the form of tributyrin may be showing promise as its makeup (three butyrate molecules and one glycerol molecule) has a higher survivability rate through the acidic conditions of the stomach, allowing it to be delivered to the large intestine. Although limited research is available on tributyrin, a recent study completed (5) did demonstrate good delivery and absorption using a three times daily supplementation schedule to mimic a parenteral (IV) infusion.

Hi, I’m Kelsey, the founder of Gut Healthy Dietitian, a group of Registered Dietitians working together to bring you the most innovative and effective nutrition care in the field of gut health. Through 1:1 and group nutrition counselling, as well as gut healthy recipes and nutrition articles, our goal is to bring you value and knowledge about all things gut health. 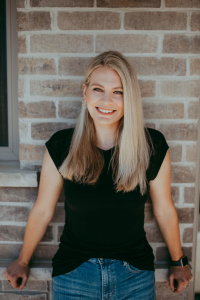 FUEL YOUR GUT: GROUP PROGRAM I am so excited to a

I want to welcome Elyse, the newest member of our

The most fun I’ve ever had during a consultation